Bernard is a retired accountant, who has been at the helm of LATH since its inception in December 2009. He was Chairman until 2018, when he decided to take on a slightly less active role as President.

He is dedicated to following our mission of easing the plight of the homeless, vulnerable, and lonely people in our community.

John is a retired management consultant and he has worked manufacturing engineering with Babcock & Wilcox and Rolls Royce. He retired in 2016 and decided to sign up to the charity (LATH) and join Bernard Potter and his team as a volunteer.

He always wanted to put back into the system by helping other people after working for 62 years and when he quickly realised he needed to find something else to do, LATH seemed a perfect match.

He is currently Chairman of LATH and is also a Trustee, and works with the rest of Trustees and volunteers to help the clients lift their self-esteem and confidence to get through hard times.

Frank is the vice-chairman of LATH. He is a bi-lingual Pole, whose work at LATH in helping our Eastern European users with a variety of problems they face with seeking employment, accommodation, and other issues, is invaluable.

Frank is a school governor for St Mary’s Crewe, and liaises with local stores for food supplies and cash collections. 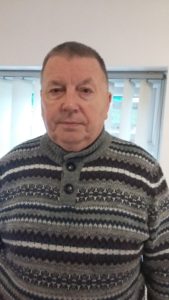 Barbara is a retired scientist who previously worked in pharmaceutical research at the Wellcome Foundation, and then as a medical writer/editor.

She is a keen conservationist, loves reading and is a crazy cat lady (she has four cats, and also volunteers at Stapeley Grange rehoming cattery).

Barbara is the Secretary of LATH and organises meetings, writes minutes and procedures, and monitors email and Facebook enquiries.

Pat worked for an accountancy company for most of her working life, and when they moved location she worked as a freelance accountant.

Now living in Crewe, Pat works part-time as a book-keeper, and spends a lot of her free time exercising her dog.

Pat uses her considerable accountancy skills in her role as LATH Treasurer.

Joan retired from Adult Health and Social Care Department at Cheshire East in 2010 and joined LATH when it first started at Christ Church Hall in 2011.  Joan has been a volunteer leader for Rainbows and Brownies for 53 years and is a local school governor.

Joan’s role at LATH is volunteer co-ordinator and she is also our safeguarding officer.